The largest cryptocurrency, considerably weakened after last week’s implosion of exchange FTX, continues to grapple with the fallout.

In what is becoming an increasingly erratic market, investors are unsure what will happen next as more firms sound the alarm over solvency and regulators step up investigations in the crypto space.

The mood among the majority is intensely fearful, and even some of the industry’s best-known names warn that it has been set back several years as a result of last week’s events.

At the same time, for Bitcoin, it is business as usual. FTX is not the first such debacle it has weathered, and under the hood, the network remains as robust as ever.

Cointelegraph takes a look at the factors set to influence BTC price action in the coming days as the average hodler gets to grips with major losses and ongoing volatility.

While little is for certain in the current crypto market environment, it is safe to say that FTX and its aftermath is now the number one source of Bitcoin price volatility.

The weekly chart says it all — a -$5,500 “red” candle for the seven days through Nov. 13 to the lowest weekly close since mid-November 2020, data from Cointelegraph Markets Pro and TradingView shows.

At the time of writing, BTC/USD is still around that close — $16,300 reappearing as a relief bounce after the pair wicked to just $15,780 on Bitstamp overnight. 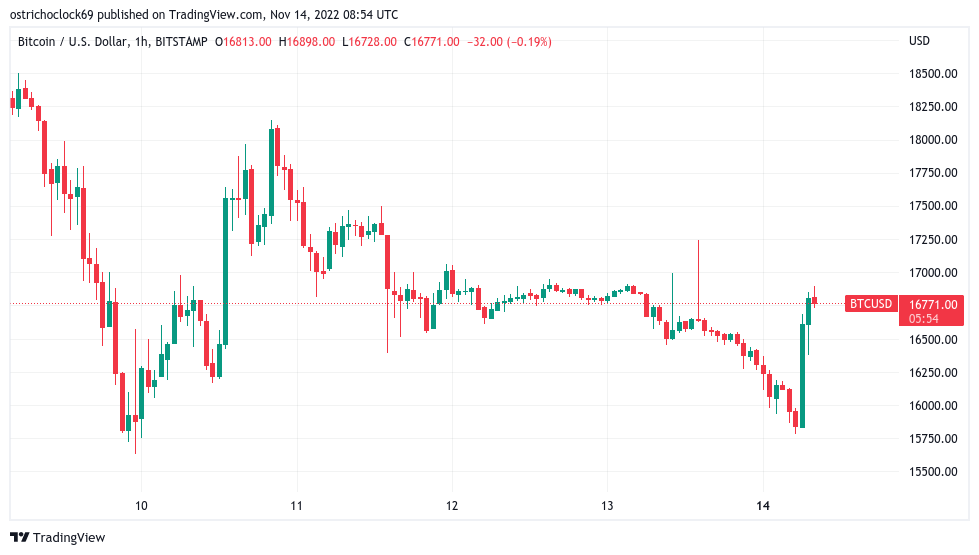 The story is far from over when it comes to FTX, as firms with exposure to the exchange and related entities find themselves in trouble.

As such, commentators forecast, there may be repeat performances in the coming days and weeks as the knock-on effects put more and more crypto names out of business.

Exchanges are particularly on the radar, with Crypto.com, Kucoin and others becoming the source of suspicion over liquidity.

On the day, a spike in withdrawal transactions at Crypto.com and Gate.io led to warnings that it may be the latest exchange seeing a “bank run” as investors seek to take control of their funds. 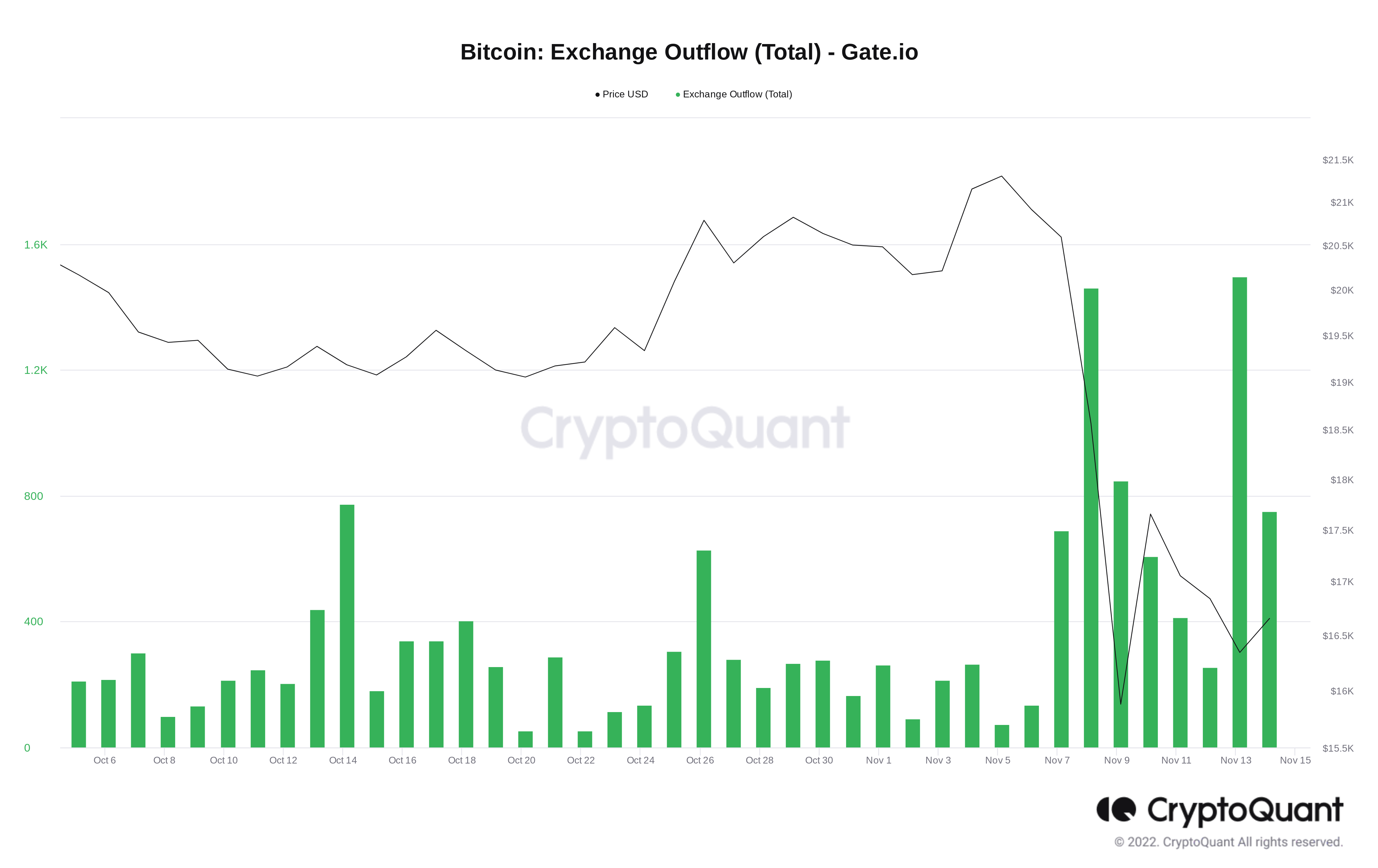 More broadly, data showed exchange BTC reserves at an estimated 2.09 million BTC, CryptoQuant noting that due to the turmoil it may not reflect the true state of affairs.

The last time that reserves were so low was in early 2018. 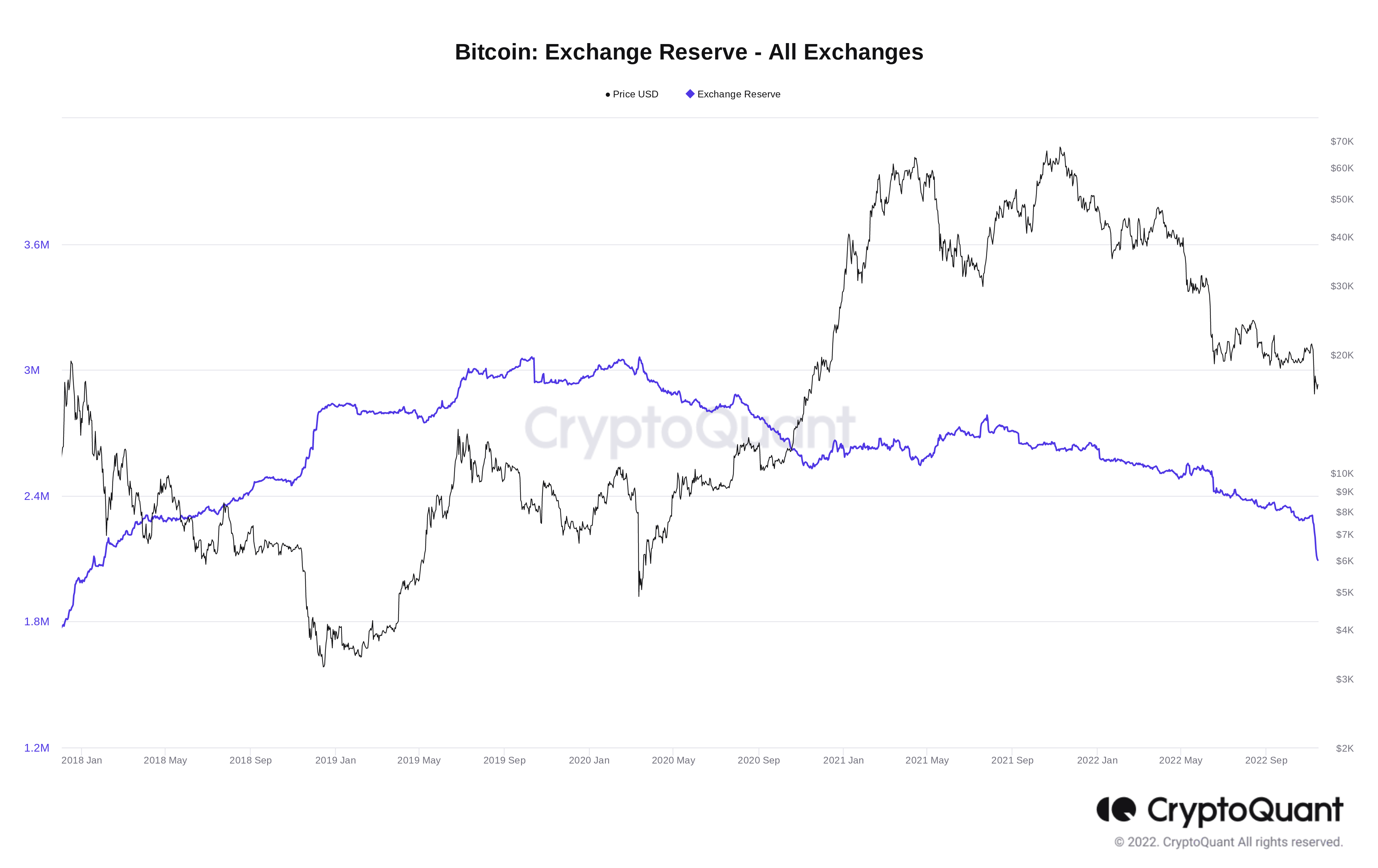 Bitcoin bounces from $15,700 as Musk puts faith in BTC

Against the backdrop of ongoing uncertainty, making BTC price predictions is thus no easy task.

Turning to the moving average convergence divergence (MACD), analyst Matthew Hyland warned that the BTC/USD 3-day chart was about to repeat a bearish setup, which led to losses both times it appeared in 2022.

“Bitcoin 3-Day MACD is in position to cross Bearish tomorrow for the first time since April,” he wrote.

“It can be avoided if BTC can get positive price action before the 3-Day closes. Previous two crosses in the past year resulted in further downward price action.” 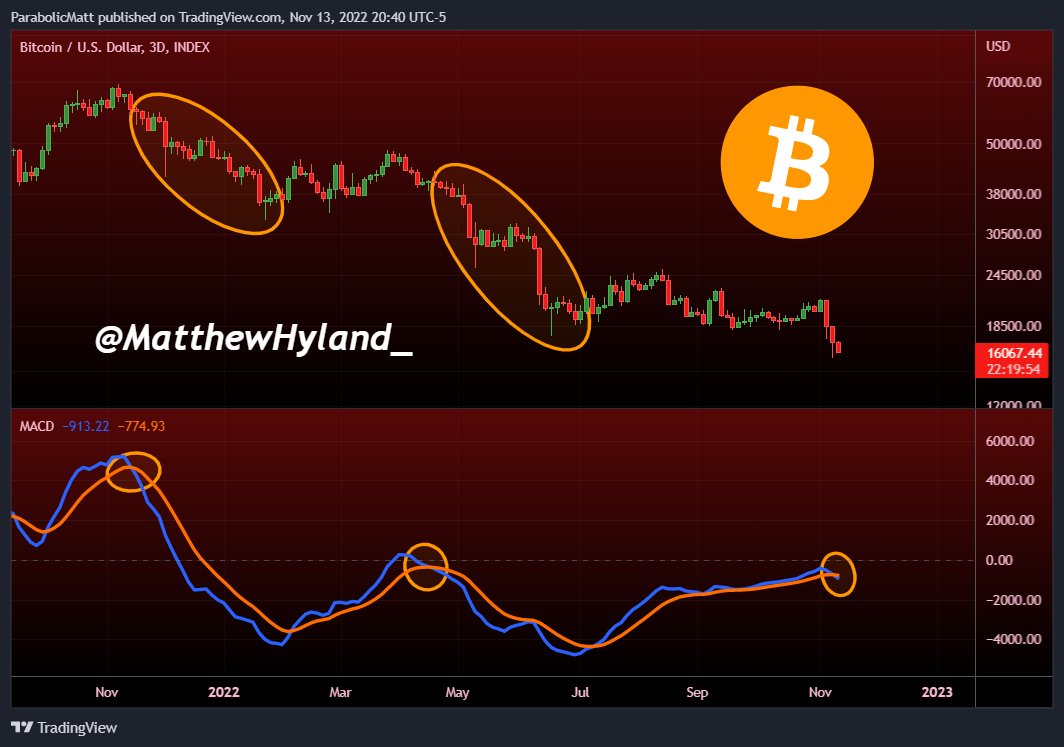 Hyland nonetheless noted that after the 2014 Mt. Gox hack, Bitcoin took almost a year to find a macro price bottom after the initial shock.

“It hasn’t even been 11 days since FTX closed up,” he added.

Fellow analyst Il Capo of Crypto meanwhile argued that the market was prepared for a “final capitulation,” which may come sooner rather than later.

This, he said in a series of tweets, would come in the form of a “bull trap” first then firm rejection, sending the market to new lows.

On shorter timeframes, popular trader Crypto Tony feared that even the lowest weekly close in two years might fail to hold as support.

“Nice breakout, but if we cannot hold the swing low at $16,400 then this was just a fake out and we wait for a test lower,” he commented about the recovery from $15,780 intraday lows.

The move came as Twitter CEO, Elon Musk, came out in tacit support.

“BTC will make it, but might be a long winter,” he wrote on the day in a Twitter debate. 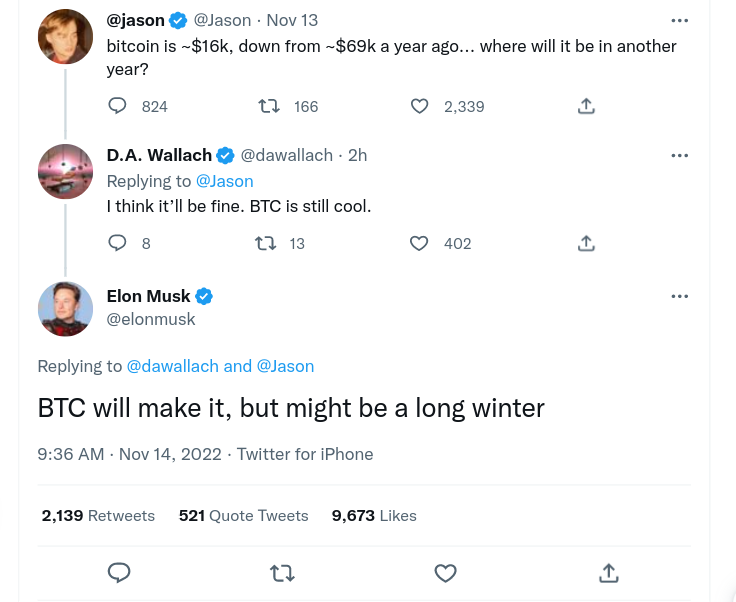 The picture outside of crypto further underscores the extent to which FTX has marked a “black swan” event for the industry.

While Bitcoin and altcoins were busy shedding in excess of 25% in days, United States stock markets recovered from losses earlier in the month.

As such, as research firm Santiment notes, there is a clear divergence occurring between Bitcoin and risk assets, this helping break a correlation that has endured throughout the past year.

“As the trading work week closes, the week’s story is the distinct separation between crypto (after FTX’s fall from grace) & equities,” it summarized in a tweet last week.

“Should $BTC traders’ trust recover after unfortunate events, there is a bullish divergence forming with the SP500.” 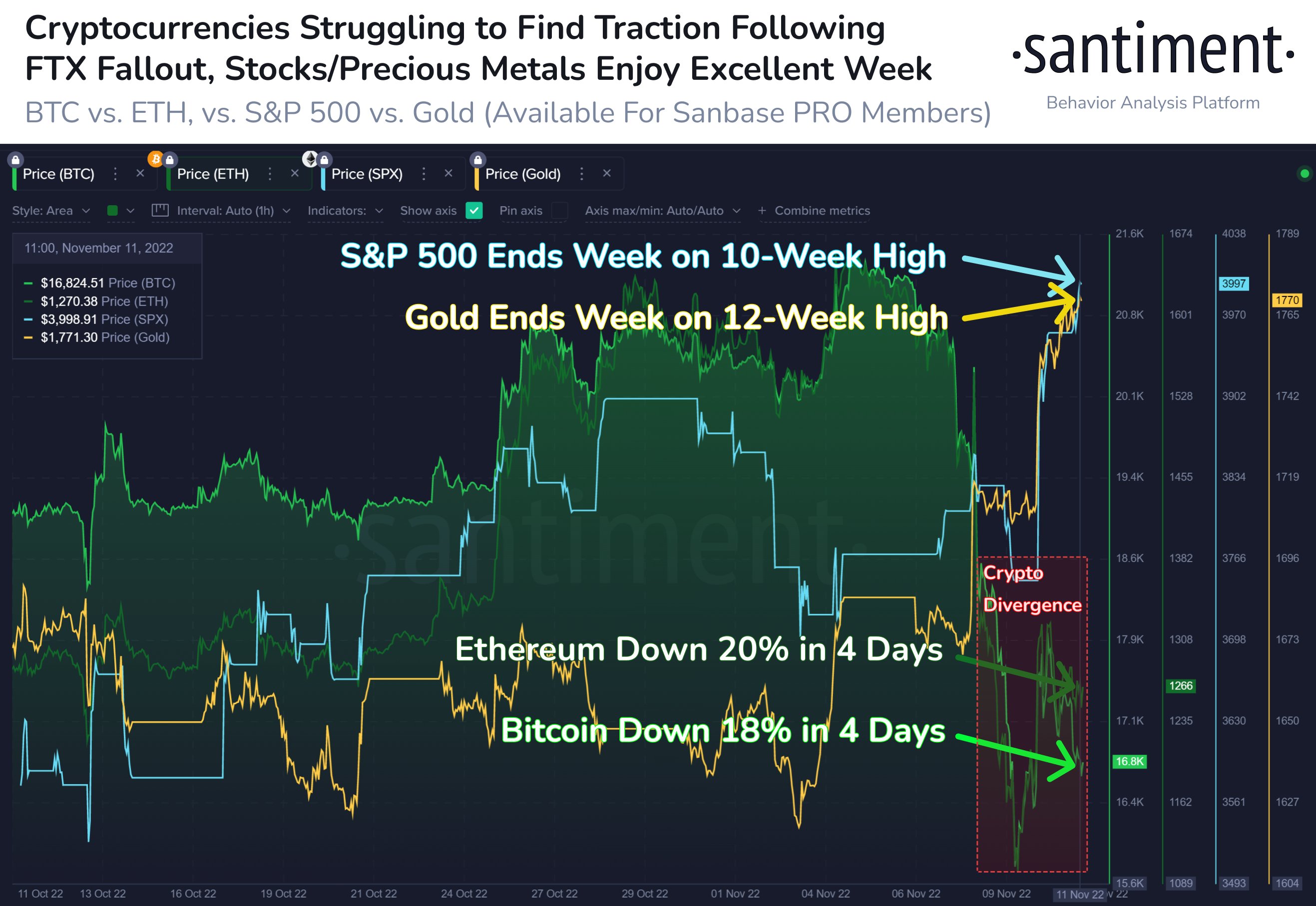 Markets commentator Holger Zschaepitz additionally noted the widening gap in performance of Bitcoin versus the Nasdaq.

“Gap in weekly performance of sliding Bitcoin, rallying Nasdaq largest since 2020. Crypto universe shrank to the equivalent of 1% of global equities,” part of new comments read on the day.

That decreasing correlation may come at a useful time macro-wise, as U.S. dollar strength makes some erratic moves of its own.

The U.S. dollar index (DXY), having attempted a rebound past 107, failed prior to the Nov. 14 Wall Street open, with the implication that risk assets should rise as a result.

Any return towards recent highs, however, and the picture could swiftly look very different.

The intraday DXY lows nonetheless saw the index return to support not tested since mid-August. 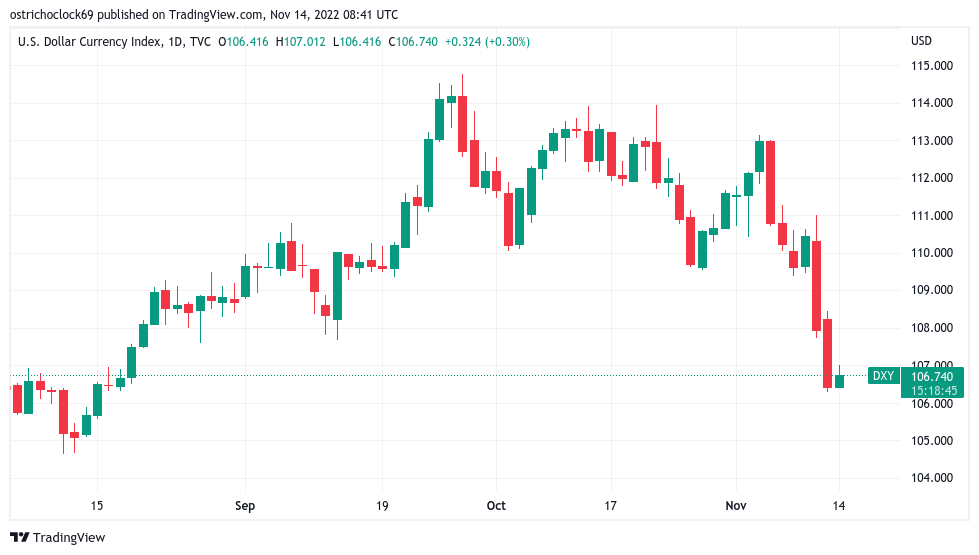 Commenting on the longer-term performance, however, popular trading outfit Stockmoney Lizards said that DXY had broken a parabolic curve in place since 2021.

“Correction will be good for Bitcoin,” part of Twitter comments added. 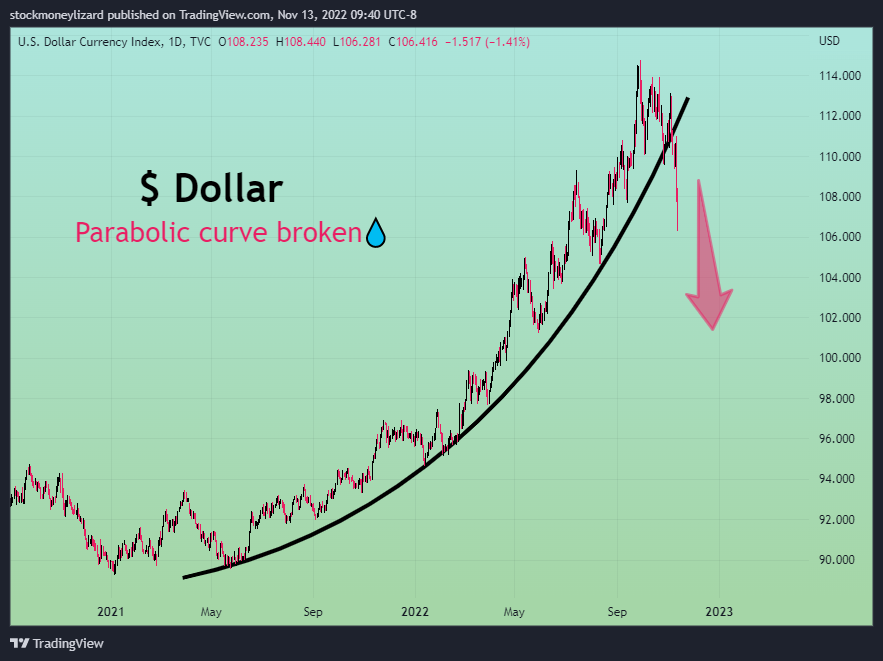 While many existing hodlers are attempting to withdraw coins from exchanges or figure out how to nurse losses, not everyone is sitting still.

On-chain data suggests that as BTC/USD hit multi-year lows last week, investors both big and small took the opportunity to “buy the dip.”

According to on-chain analytics firm Glassnode, wallets containing between 1 and 10 BTC saw a dramatic increase. 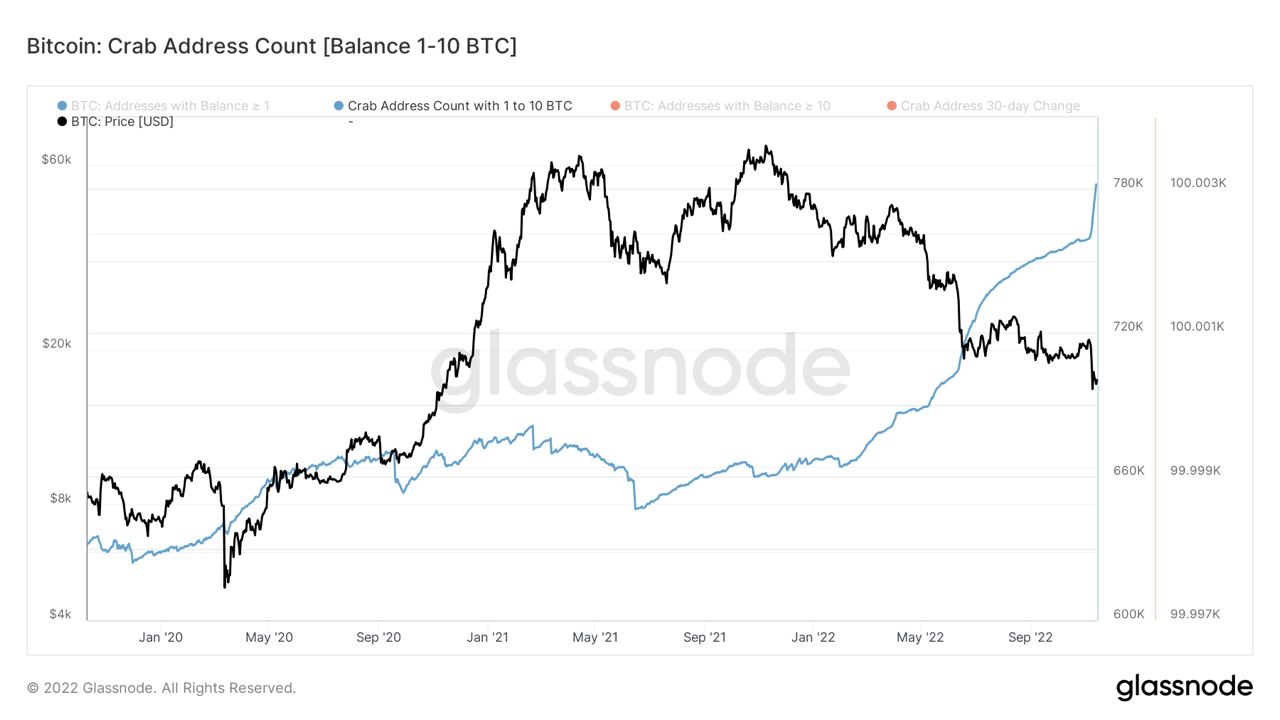 The trend also appears to be playing out among the largest hodler cohort, the “mega whales” of Bitcoin. These entities with a wallet balance of 10,000 BTC or more are also growing, and now number almost 130, Glassnode shows. 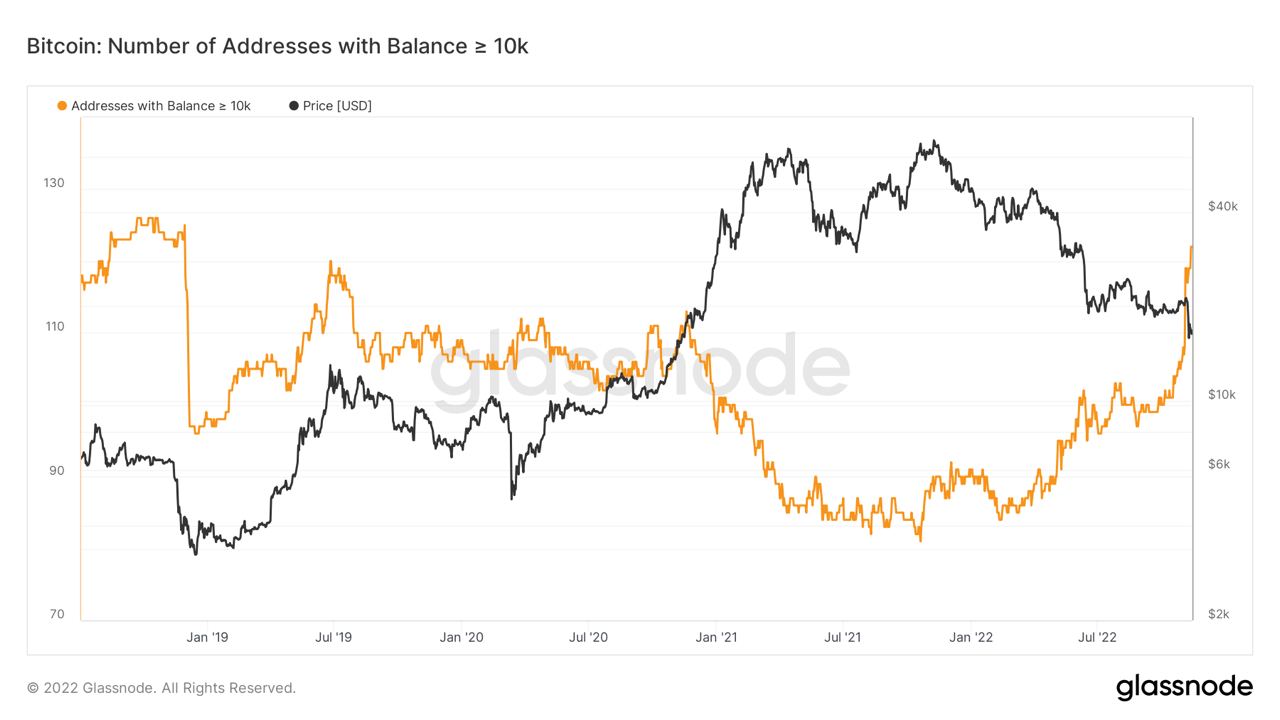 A group firmly not in accumulation mode at present, meanwhile, is miners. After a sharp reduction in their reserves last week, the BTC hodled by miners tracked by CryptoQuant is still trending downward.

Despite this, reserves remain higher than at the start of 2022, and recent sales amount to an insignificant portion of miners’ overall position. 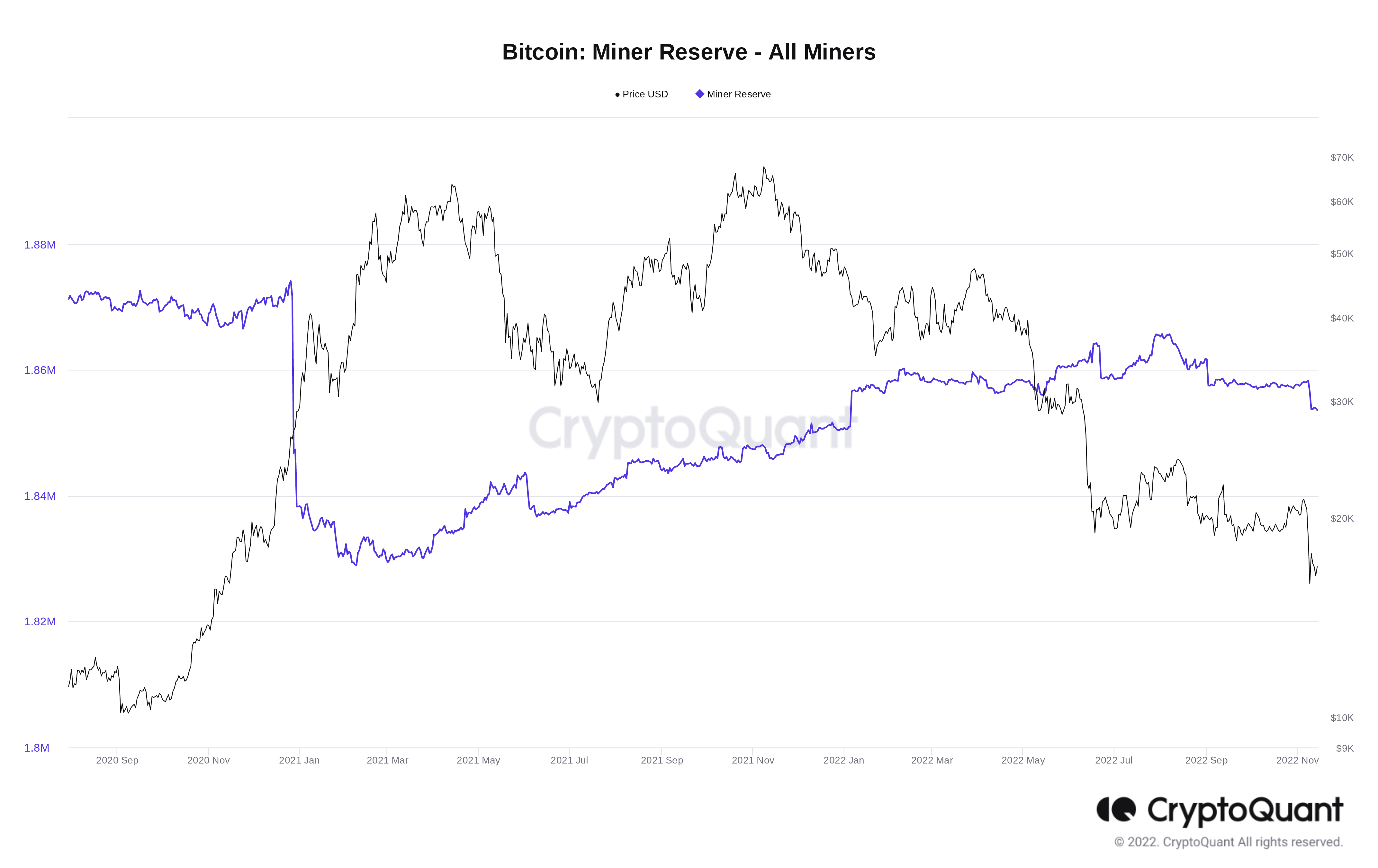 Predictably, overall crypto market sentiment took a major hit thanks to FTX — but is it really all that bad?

According to the Crypto Fear & Greed Index, the industry may in fact be taking the slew of bad news in its stride.

Over the weekend, the Index’s score touched a local low of 20/100 — firmly characterizing the market mood as one of “extreme fear.”

That represents a 50% drop versus the peak of 40/100 seen on Nov. 6, these marking a three-month sentiment high.

Nonetheless, 2022 has seen much lower scores, Fear & Greed reaching just 6/100 over the course of the year.

Should further fallout hit, even a fresh 50% dive from current levels would only take sentiment to the area which normally marks macro price bottoms for BTC/USD — around 10/100.

The views and opinions expressed here are solely those of the author and do not necessarily reflect the views of Cointelegraph.com. Every investment and trading move involves risk, you should conduct your own research when making a decision.

How can DeFi drive Financial Inclusion?